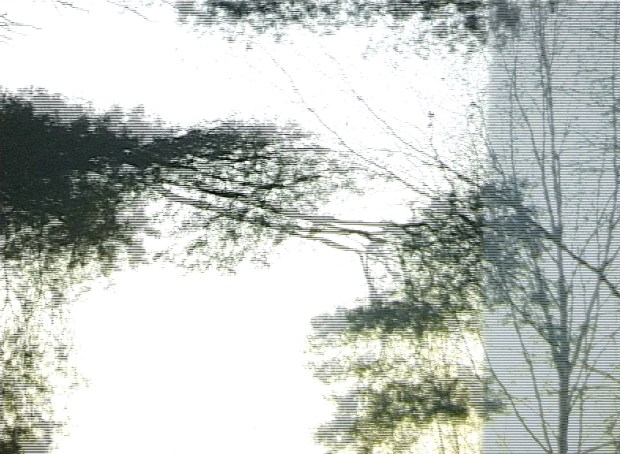 Screens no longer use cathode ray tubes for rendering the image.
Video signals and video images are no longer interlaced.

The tecnique of interlacing was invented as the combination of magnetic tape and cathode ray tubes; the technology  used for television and video monitors, consisted of an analog electronic pulse (or waveform) that could not capture and render all the information in an image fast enough for motion to be reproduced as it unfolded. This problem was solved by letting the analog signal move over the image surface faster by letting every other line in the picture be registered one fifty-second part later.

Any changes that occurred during this interval are revealed in the difference between the first set of lines and the second set of lines. Interlacing is interesting because it is a registration of image accross a given time that happens within each frame of video rather that between them. The information in each single image bear witness of the displacement that was taking place, time is contained in each single image.

For the piece Atlas, I shot most of the images while leaning out of the window of a car traveling at slow speed. These recordings took place on the Norwegian west coast and the images show close-ups of details in the lower part of the landscape, filmed with an old video camera,  Sony TRV900. While paying very close attention to the appearence of the images on the LCD screen of the camera, I manipulated how the details of the landscape, which is stationary in relation to the moving car, would appear by tweaking the settings of shutterspeed and aperture. As these have impact on how the images form both temporal sequences and visual surfaces, the movement is perceived differently from the way it looks to the naked eye. I concentrated on disrupting the appearance of movement from left to right and rather have the details stand out as discrete points, static but short glimpses that appear and disappear without direction, as samples or probes, creating rhythm and texture, but not representing the actual movement happening. 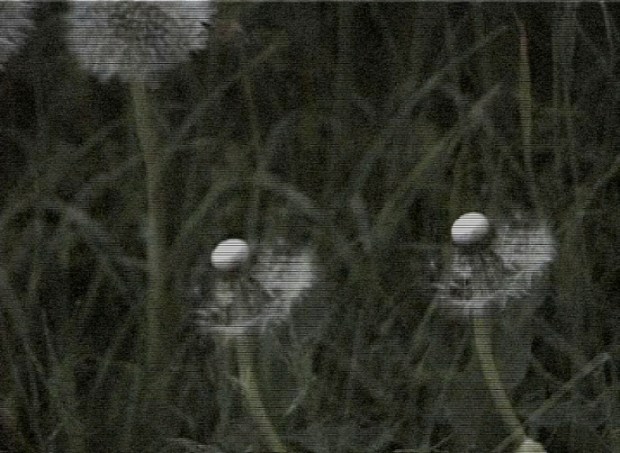 In this case, due to the car, the camera moved between the first and the second set of interlaced lines captured. Details of the motive, such as a dandelion, was registered at two different places. When interlaced images are displayed on a LCD based display, both sets of lines can be rendered at the same time. The movement from left to right doesn’t appear through the sequence of images but is directly rendered in each image.

The  piece was developed as a video installation at an exhibition at Lydgalleriet in november 2009, in response to a commision from violinist Victoria Johnson.

I had done some of the recording during late summer and some more in early winter and kept that division between the two sets of material. While paying careful attention to the appearence of details, movement, flow and texture through the interlacing tecnique, I edited the material according to qualities and characteristics that repeated the forms, rhythms and overall structure in both parts.

The two parts were then presented in separate rooms, alternatively accompanied by a soundtrack in a cyclical way that shifted the attention from room to room, guiding the movement of the spectators within the gallery. Each part lasted for about three minutes before it left the room silent and dark. At exactly the same time, the soundtrack continued in a different room where the second part had started playing. The audience thus had to physically engage with the space and the temporality of the piece, moving between the two rooms in order to experience it.