In a performance at Avantgarden Teater in Trondheim in 2001, I staged, together with musician Tore H. Bøe, Malick’s script for Badlands as an experimental piece of theatre where we explored the tension between narrative and working with abstract audio-visual processes. 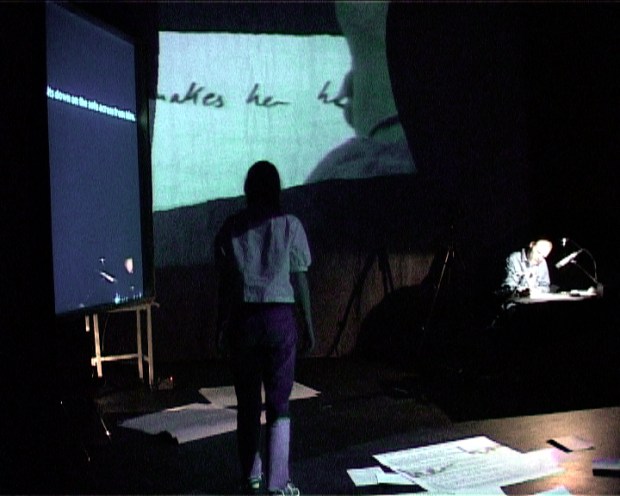 Ellen Røed as Holly and and Tore H. Bøe as Kit.

Inspired by Kurt Schwitterz, we treated the moviescript for Badlands, a printed pile of paper constituting a narrative plot, as raw material for the performance. We looked at it, read from it, cut it, teared it up, filmed it, all while recording the sounds that made. Parameters from the sound were remapped to those of the video projections thus creating a system where the different elements repeated and informed each other. Tore employed microphones and I, a video camera, as probes on the stage, and we turned the script into sound and image by feeding it into audio and visual processes of feedback, created through analog sound and video signals as well as the software nato.0+55+3d, set up as  a complex system of feedback processes. On the stage, we were operators and observers of the responsive system while enacting parts of the narrative. A wooden tower, constituted a stabilizing element of the scenography.

In the piece, multiple agencies; human, machinic, material, were pitted against eachother as a set of conflicts, while Tore and I, like Holly and Kit, appeared as disconnected in relation to the plot we were ourselves creating.

The piece was presented in the international theatre festival Bastard.

We presented a follow up in January 2002, Papercuts, where we focused on the escalating spiral of violence that Kit and Holly found themselves trapped in.